Back in 2008, an eight-unit apartment building and a single family house at the corner of Gower and Fountain in Hollywood were razed to make way for a 22-unit condo development that never got built. But now, after several lonely years, plans have been approved to bring something other than grass to the empty lot. Under the Small Lot Subdivision Ordinance–which allows for several small detached houses on a single property–developer Metro Investments plans to build 11 little houses on the site. Metro acquired the property last January and say they’ve worked closely with the community to get the neighbors on board with the plans, which was not the case with the condo development.

The houses will be a mix of roughly 1,500-square-foot two-bedrooms and 1800-square-foot three-bedrooms, each with a roof deck. Art Simonian, principal at Metro Investments, says the project is aimed at “young professionals,” who he hopes will be drawn to the walkable neighborhood. Metro, which is designing and building the project, has not yet finalized the designs, but funding is in place and they hope to break ground by the first quarter of next year. No word yet on how much the finished units will cost. 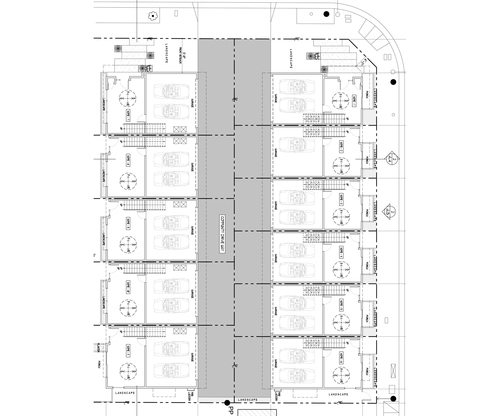