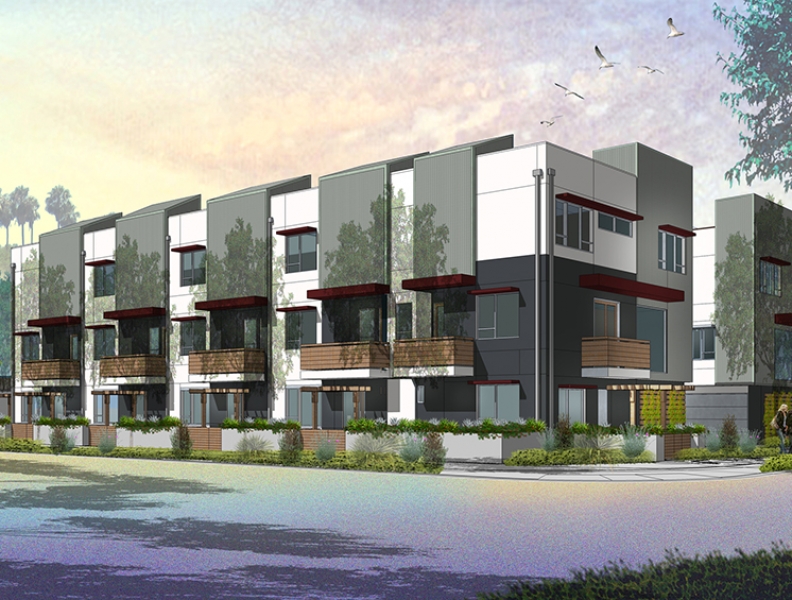 Eagle Rock near the Highland Park border is set to get ten slim new houses on a parking lot right next to the Sparkletts plant and its big green sign. The project from local developers Metro Investments will sit at the corner of Avenue 45 and Lincoln, where a parking lot currently resides. The dwellings will be well within walking distance to the coolness of Highland Park’s rapidly fancifying York Boulevard, and not far from the amenities on Eagle Rock’s Colorado Boulevard, either.

The small-lot houses are expected to be three-bedroom, 3.5-bathroom residences, “closer to the 1,800-square-foot range,” Metro Investments principal Art Simonian tells Curbed LA. The dwellings that are along Avenue 45 have entrances that face that street, with 15-foot setbacks “to create a lot of lush, open space.” (They were only required to have five-foot setbacks.) The new collection of residences won’t be far from a planned Occidental College takeover of some storefrontsthat could stretch the explosion of hipness westward on York.

Though Metro says it’s too early to tell now how much these places will cost once they’re complete, materials presented to the Eagle Rock Neighborhood Council back in May suggested that they’d be in the $550,000 to $650,000 range, says the Eastsider LA. The project is currently entitled and in the process of getting building permits.